CAPPADOCIA : A fascinating combination of nature and history 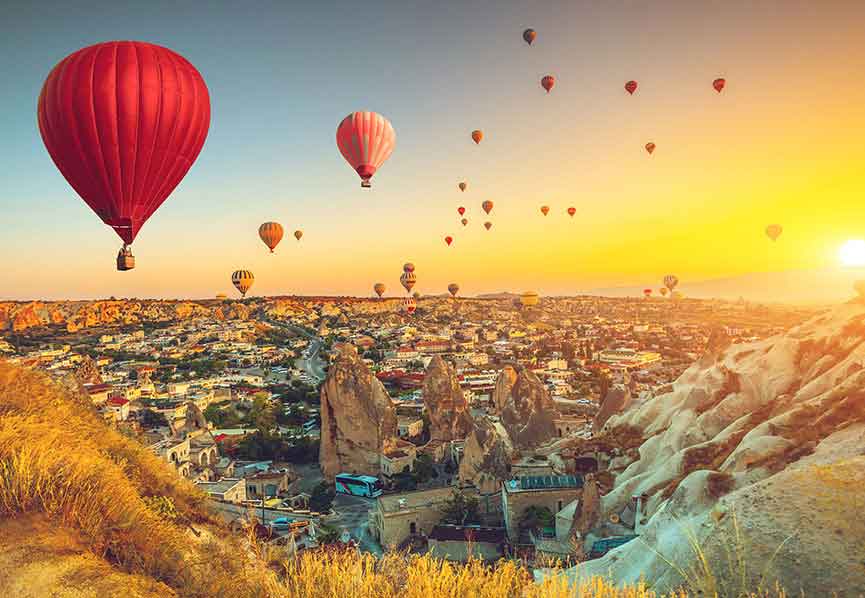 Cappadocia, which is on the UNESCO World Cultural Heritage List and the New Wonders of the World List, is at the top of the “must see places” lists of all travelers and travel enthusiasts.

Cappadocia’s beautiful valleys, natural wonders, fairy chimneys, underground cities, traditional pottery workshops, churches carved into the rocks, local delicacies, the horses that give the region its name (Cappadocia means the Land of Beautiful Horses in Persian) and, of course, the hot air balloons that turn the sunrise into a feast When they come together, they create a magical fairyland. Undoubtedly, you must experience this tale in person; Therefore, it would be better to perceive this article you are reading not as an insufficient effort to explain Cappadocia, but as a preliminary information initiative for future visitors of this special region 🙂

Although it is connected to Nevşehir, Cappadocia, which covers an area where Kayseri, Niğde, Aksaray and Kırşehir provinces intersect, emerged 60 million years ago when the layers formed by the lava erupted by Erciyes, Hasandağı and Göllüdağ were eroded by water and wind for millions of years. The region, where the first settlements date back to the Paleolithic age, later became an important point on the Silk Road; Throughout history, it hosted the rights of the Hittite, Assyrian, Phrygian, Persian, Roman, Seljuk and Ottoman states. Today, it is possible to find traces of all of them in valleys, fairy chimneys, underground cities, churches, monasteries and houses, and the mystical effect of this rich cultural mosaic. Cappadocia is one of the destinations that must be experienced with its unique natural beauties and beautiful  Hotels, pensions and cave accommodation.

Places to See in Cappadocia

Uçhisar Castle: 5 kilometers from Nevşehir center, Uçhisar is a castle that was formed by the carving of the steep cliffs of meteorological factors. In other words, it is the largest and most beautiful fairy chimney seen from all over Cappadocia. The summit of the castle is the only place where Cappadocia can be seen from a bird’s eye view. There are many carved jars, carved tombs and large cisterns at the summit of the castle. Looking down from the castle to the north, you can see the Walnut fairy chimneys, Nevşehir and Oylu Mountain in the west, the new Uçhisar just in front of the castle, and the summit of Hasan Mountain in the far southwest.

Üçgüzeller Seyir Tepesi: The magnificent view of the fairy chimneys and Erciyes Mountain can be seen from the observation hill, which is five minutes away from the Ürgüp District.

Paşabağ Priests Valley: It is the best place to observe fairy chimneys in Cappadocia. The monks of the period were used as hermitages by their priests. There are many churches, monasteries and chapels.

Güvercinlik Valley: It is the best known valley of Cappadocia. It takes its name from the pigeons that settle in rock cavities, as you might guess. In the past, the people of the region fed these pigeons and used their manure in vineyards and frescoes, and their eggs in construction works. If you want to see both the pigeon’s nests and the unique vegetation offered by nature, do not return without taking a long walk in this 4-kilometer-long valley. There is also a waterfall in the valley, which is a natural wonder and flows from a height of 15 meters but is missed by many due to different routes; tell me 🙂

Lovers Valley: Also known as Baglidere Valley, it is located in the Göreme region of Cappadocia. The most beautiful sunrise and sunset in Cappadocia are watched in this valley. An ideal place for lovers; But let’s warn you right away, even if you’re not in love, it’s easy to fall in love here. The valley, which has a walking track of approximately 5 km, is also ideal for those who love to camp.

Zelve Valley – Open Air Museum: The valley, which is one of the most important places to see in the Cappadocia region, is the oldest and long-used settlement. 5 km from Avanos and 1 km from Paşabağları, Zelve was established on the steep and northern slopes of Aktepe. Consisting of three valleys, Zelve Ruins is the place where fairy chimneys are most concentrated.

Güllüdere Valley: Göreme Güllüdere Valley, which spans an area of ​​​​approximately 4 km, is one of the most popular trekking valleys of Cappadocia, as it is quiet and calm compared to many regions. Here, too, sunrise and sunset offer a magnificent visual feast. It is also a beautiful valley where you can watch the riot of colors created by the balloons taking off in the morning.

Balloon tours are carried out by private companies. Due to the limited capacity of the balloons and the risk of not being able to find a place, it is useful to make a reservation in advance. Balloon tour fees are 700 – 1,000 TL per person, depending on the season. may vary between The price does not change for students and children. The companies that make the balloon tours will pick you up from your hotel 45 minutes before the tour by private vehicles. They serve you a half breakfast before the flight, and champagne and soft drinks for the celebration after the flight. As a souvenir, do not forget to take your special flight certificate prepared in your name.

Cappadocia balloon tours are carried out every day when the weather conditions are suitable, during sunrise, between 05.00 and 06.00 in the morning. Balloon flights, which rise 600-900 meters above the ground and glide in the sky, giving you a 360-degree panoramic dream, take about 1 hour.

The Kızılırmak, which flows through the middle of Avanos, one of the three touristic centers of Cappadocia, in addition to Ürgüp and Göreme, has left its tuffed red soil as a gift with its many unknown secrets for centuries, and has actually been instrumental in the birth of an art. The ceramic paste obtained with this mixture of red earth and clay was blended with the handicrafts of Avanos artists and made Nevşehir a place known in the world with Avanos pottery.

Although Avanos pottery may seem easy when it is on the wheel and in the hands of its master, it is actually not that easy at all. The unique characteristics of Avanos pottery must be because they require both dexterity and creativity; This grueling process, which also includes shaping, armoring, polishing, drying, cooking and glazing, is also called ‘Avanos art’. I am sure that you will find it difficult to choose casseroles, jars, jugs, candle holders reflecting Hittite and Phrygian art, plates, glasses, tear bottles, Ottoman ewers, pendulums, unusual candlesticks and souvenirs that you can use in your home, saying “I bought them from the connoisseur in Avanos” to those who ask.

After taking our balloon tour at sunrise and visiting the unique fairy chimneys, underground cities, museums and pottery workshops, you are obviously very hungry; So what will you eat? You can’t come here and eat the special pot kebab special to Cappadocia…

A wonderful flavor cooked in those unique jugs of Avanos, containing lamb, onions, eggplant, mushrooms, peppers and potatoes. The traditional test kebab is cooked on low heat for at least 2 hours and you break the jug of the kebab served to your table with a hammer. Because it is cooked on low heat, an insatiable aroma mixes into its water. Testi Kebab prices are 30 – 70 TL according to restaurants. varies between Here are some of the good places to eat delicious test kebab:
– Uranos Sarikaya Restaurant
– Millocal Restaurant

– This is our restaurant

Undoubtedly, the authentic tastes of Cappadocia are not limited to test kebab. Some of the different flavors you may want to try according to your taste and I think you will not regret; Lamb stew with chickpeas cooked slowly over a charcoal fire, stuffed quince stuffed with quinces stuffed with ground meat, apricot stew made with dried apricots and lamb meat, rice with zest, dü (a type of bulgur) soup, Nevşehir ravioli, and finally, our dessert is a kind of flour halva. Dolaz, which is made with eggs, molasses, honey, walnuts. 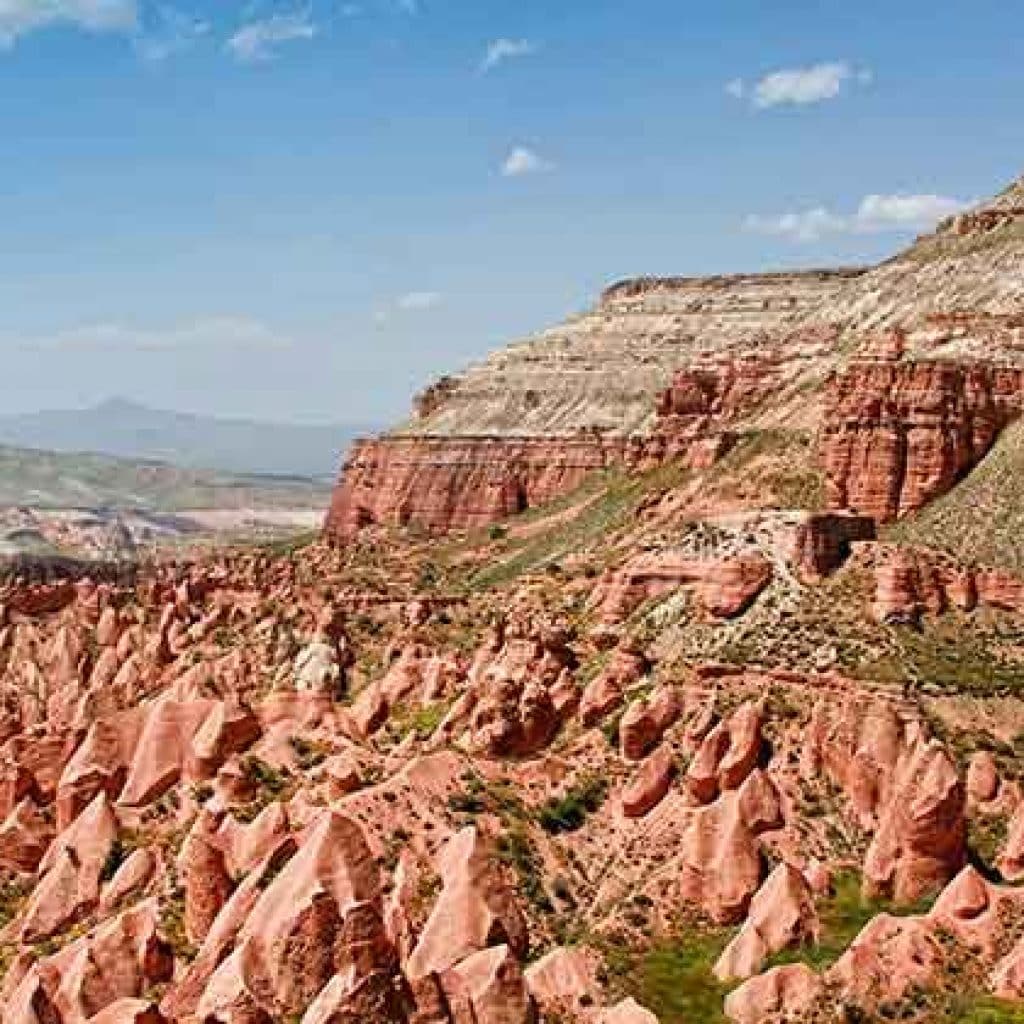 Traveling to Cappadocia with Tourlider.com was a very special and impressive vacation for me. There are places; You go, you travel, but you don’t get enough and you plan to go again. This is the place for me in Cappadocia… I can’t wait to come back as soon as I can and breathe that exotic atmosphere again.